As part of its ongoing commitment to position itself for growth and better serve its customers, Farmington, Connecticut-based Ducci Electrical Contractors is investing in major new equipment and fleet management and maintenance technology.

Ducci Electrical, while originally an electrical construction contractor, grew until rail, road and road infrastructure projects accounted for around half of its annual business. This is generally equipment-intensive work, and its effectiveness largely depends on having the right (and often highly specialized) equipment properly maintained and ready for use at all times.

The company now has a fleet of more than 130 registered vehicles, not to mention dozens of excavators, drills, backhoes and other similar off-road equipment.

The purchases are also part of Ducci Electrical’s strategy to stay on top of new construction specifications and allow the company to increase the capacity and variety of work it can do on its own.

Among its recent equipment purchases are specialized drilling rigs capable of drilling massive box foundations in tight spaces and in soft soil or wet subsurface conditions.

Notably, Ducci Electrical Contractors has also just started taking delivery of four brand new road-rail bucket trucks. These new trucks, highly customized for catenary and rail signaling work, are designed to increase capacity and begin replacing and upgrading its existing fleet of a dozen similar vehicles. This equipment has been essential to the company’s railway work for the past 25 years.

The largest of these all-new custom hi-rail bucket trucks weigh 54,000 lbs GVW and cost over a quarter of a million dollars each. Ducci Electrical sees these specialized trucks as a major investment in its future work on the railroad. These purchases enable increased productivity through full customization, increased reliability, and the flexibility to more easily rotate vehicles out of the field for preventative maintenance and repairs without sacrificing workability.

Despite the considerable costs of new equipment, Ducci Electrical officials noted that investments are a crucial step in staying competitive and expanding the company’s capabilities. This expansion and diversification of its work is a key part of the company’s growth strategy. 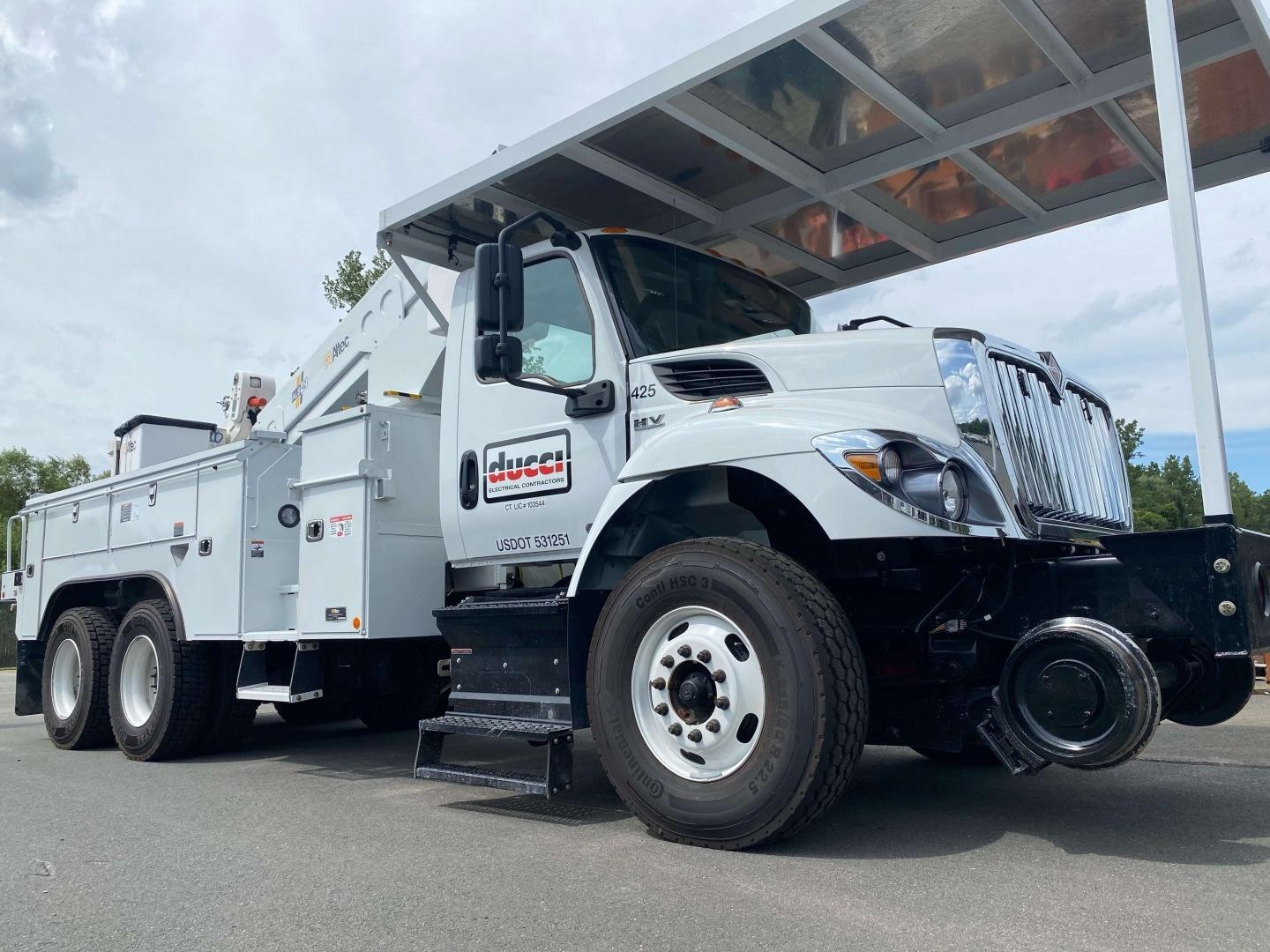 Ducci Electrical Contractors has long been a company committed to quality and pride in its work. It has long been committed to always providing its employees with the tools necessary to do their jobs as efficiently as possible. Providing more advanced and expensive hand and power tools, man lifts and worksite organization makes a major difference in the efficiency and morale of its employees, while ensuring as safe an environment as possible on its projects. Ducci Electrical considers it essential to equip its employees in this way in order to maintain a competitive advantage, prioritize safety and retain its best talent.

It’s the same approach the company takes with its heavy equipment. The fleet of more than 130 registered vehicles of Ducci Electrical Contractors includes railway cranes up to 35 tons, highly specialized bucket trucks, tipper and rack trucks, shovel-derricks, tractors, box trucks, platforms, vans and Suite. This inventory is complemented by many other specialized drill rigs, excavators and other off-road equipment.

As Ducci’s management notes, the equipment can only make money when it works hard on projects. That’s why Ducci has gone to great lengths to develop a robust preventive maintenance program to meet the demands of its growing fleet, proactively keeping all equipment running as reliably as possible rather than reacting to problems and needs. repairs as they arise. Preventive maintenance consists of avoiding loss of team time by minimizing equipment breakdowns and failures.

For example, specialized railway work often means significant logistical constraints and short work windows due to the constraints of operational railways and the need to keep trains running. Sometimes a railroad night crew has only four hours to do productive work per shift after all track and power outages have been granted. A blown hydraulic line on a truck in this environment can instantly turn an 8-hour shift for six workers into a waste.

This proactive approach to investing in and maintaining its tools and equipment is a major part of Ducci Electrical’s long-term strategy to expand its capabilities and be the most successful and safest electrical contractor in the world. its market.

Ducci Electrical was founded in 1949 by E. John Ducci, who had served as an electrician in the United States Army during World War II. From humble beginnings as a small contractor and appliance showcase, over time Ducci Electrical has expanded its services and now focuses on large electrical contracting jobs throughout the North East.

For much of its history, the company operated almost exclusively as an electrical contractor on traditional construction projects. Today, in addition to having grown considerably in transport infrastructure works, it also regularly serves as a general contractor and has expanded its capabilities to carry out much of its own earthworks and foundations on highway, railway and traffic projects.